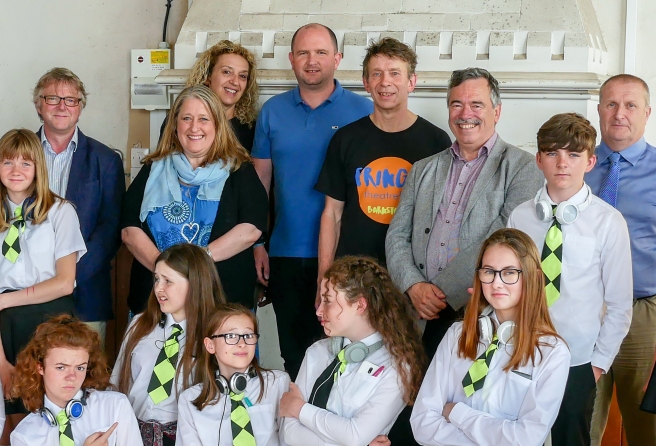 Heads Up Youth Theatre were in mid-rehearsal for their Fringe TheatreFest performance of Girls Out Loud when they were interrupted for a photo-call.

Joining them in Bridge Hall, the Old Magistrate’s Court located in Bridge Chambers, were some of the sponsors of this year’s Festival.

The resulting photo sums up the alliances that make Fringe TheatreFest happen – and which led to another record-breaking year for the biggest Fringe Theatre Festival in the South West.

First the building.  Fringe TheatreFest was invited to stage performances in Bridge Hall in part to bring the room to the attention of the town.  The hall has recently been inactive but is now being renovated.  In various ways, Fringe TheatreFest encourages audiences to look at Barnstaple with fresh eyes.  Many comment on the splendour of the buildings where performances take place – The Guildhall, St Anne’s Arts Centre, Queen Anne’s Café, The Baptist Hall and so on.  Bridge Hall can now be added to the list.

Next the theatre company.  Heads Up Youth Theatre are part of Make The Move, based in Ilfracombe.  Make the Move’s young stars gave 7 performances, most of them in public spaces such as The Square, Green Lanes Shopping Centre and Paternoster Row, delighting passers-by as well as audiences that had sought them out.

In the photo, they represent the 78 companies – mostly professional – who came to Barnstaple to present 240 performances in 20 different locations from the High Street to the Queen’s Theatre main stage and all points in between.  A company travelled from New Zealand – via festivals in Poland and the Czech Republic.  A number of companies and volunteers visited from the Republic of Ireland.  Other companies gathered from across the UK.  Many out-of-towners were provided with somewhere to sleep by local hosts – an offer that has meant new friendships formed.

And the Sponsors.  Without the support of sponsors and other grant-giving organisations, Fringe TheatreFest couldn’t happen.  Represented in the photo are Talo Homes, Fringe TheatreFest’s first overall Festival Sponsor.  Talo Homes also sponsored the Tent on the Strand which boasted a particularly strong programme of family shows.  The Tent is the most expensive of the venues to hire and secure, its presence made possible by the Rotary Club and Councillor Grants.

Samuels Solicitors were a venue sponsor for the third year running, sponsoring the programme of work in The Guildhall.

David Wilson Partnership sponsored the programme in St Anne’s Arts Centre for a second year.  The Guildhall is made available by the Town Council and St Anne’s by the Plough Arts Centre.  It is this coming together of different partners that brings the Festival into being.  In the same vein, Selladoor Venues made the Queen’s Theatre available – both the main stage and the café upstairs; The Golden Lion Tap, The Southgate and the Liberal Club provided space for venues; Queen Anne’s Café became the Central Box-Office as well as hosting two performances; Green Lanes Shopping Centre was buzzing with public performances; Barnstaple Library hosted an event for toddlers; Barnstaple Coffee Shop hosted a ‘taster’ session; and Cove Boutique was the venue for a film made in a day.

The box-offices ran exceptionally smoothly this year thanks to a grant from Fullabrook PLC that allowed investment in new equipment.

Also in the photo is Rosie Bracher, of Rosie Bracher Solicitors, who is not only a Gold Sponsor but also a volunteer.  As such, she represents the other indispensable element that delivers Fringe TheatreFest.  Over 80 volunteers worked tirelessly over the long weekend in box-offices, as stewards and as technical staff while a core volunteer-team work throughout the year to deliver what has become a sizable operation.

Fringe TheatreFest can confidently look forward to bringing fun and thought-provoking entertainment to Barnstaple next summer and providing another event that North Devon can be proud of.